I rely on taxis for getting from the hotel to the customer site and back. Most taxi drivers have not heard of the customer site--at least not by its English name. Luckily getting there is quite simple: leave the hotel, turn left, turn right, you're there. See my MS Paint map: 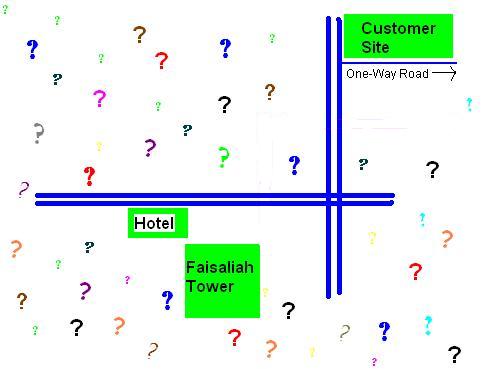 So in the past four days, only one taxi driver knew the place. The rest of them I had to direct there. Luckily I've been here enough now that this is an easy task.

The way back is another story. The major road that runs by the site is actually one of the major highways through Riyadh, and there are not many places to cross it. Additionally, the road in front of the site is one way. I've pretty much been taken back along a different route every time I've gone from the site to the hotel, most of them through small roads. Luckily most taxi drivers have heard of my hotel, and if they haven't, they've all heard of Al-Faisaliah Tower.

This entry is really just an excuse for me to draw a silly map in Paint. :) Also, I have no idea which way is North on my map, and I'm too lazy to look it up. Also note that both major roads do have side roads between the hotel and the site, I just didn't draw them because I don't know where they go.