It's weird to be responsible for developing the emotional intelligence of another human being. Especially when my own is still a work in progress.

One area I've been working on lately is resilience when making mistakes. I think I'm getting better.

It's been real hot here and yesterday we had Mary, Bert and Ruby over for toddler happy hour. We had the bubble machine out that I had previously fixed and while it works great, the broken fan blade does cause it to be a bit loud. So I'm trying to remind myself not to be annoyed but instead to focus on learning that next time I want to test something with moving parts, I better make sure those moving parts are all clear.

Before our trip West I also started doing a bunch more soldering, determined to actively practice. And what better way to practice than catching up with old HackerBoxes? Well, practicing of course means mistakes. While soldering the header pins for connecting the controller/display board to the main board on HB 57, I didn't pay attention to the pins being perpendicular to the board. And so the pins ended up skewed such that they were too wide at the end for the controller board to fit on them. So I learned to pay attention to that. And I also learned a bit about desoldering.

While working on HB 63, I accidentally put the header pins on the wrong side of the board. So hopefully I learned a new thing to pay attention to. And I got to practice desoldering some more. And since these header pins were a less standard size, I had to buy more parts too. Sam did look pretty sad while I was mangling the headers off him: 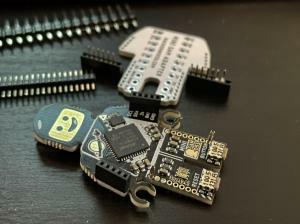 Past me would probably have given up after either of those mistakes. They still feel incredibly frustrating. But present me is feeling pleased with how much better I've gotten at soldering. HB 61 worked on the first try (I haven't been doing my backlog in order - this was the last one I did before the trip). 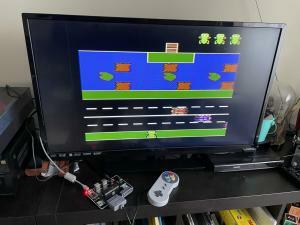 And after getting back from our trip, HB 66 was waiting for me and I got the FM radio working on the first try as well. So that felt good. Of course I keep pushing myself and tonight I found some new mistakes to make. I'm trying to solder a few segments of NeoPixel strips together such that there are a few inches of space between segments of strip. And I got the wires connected to the strips with what I thought looked like a decent connection. Only to discover the wires were twisted such that the two strips were facing in different directions. And while trying to fix that, I pulled the pads off the strips. Dangit! Good thing a strip of 60 pixels was only five dollars, so I can afford to make a few more mistakes while I figure out how this works.

Here's to mistakes and learning from them.