After a relatively dry June, it's gotten real wet here. The sump pump cam proved its worth today, although I did end up crawling into the crawlspace anyway, just to double check.

JB enjoyed swim this morning and afterwards spent some quality time splashing puddles in the yard. This afternoon we dropped her off at Jamie's parents. Which means rainy day project time for me.

I have a thermistor and new solar panel waiting to enhance the solar library, but it doesn't feel right to work on that while it's raining. So instead I worked on this: 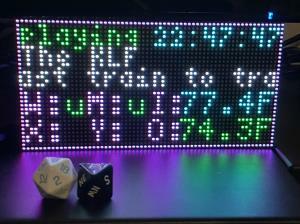 This 32x64 LED screen came in HackerBox 65 and I've been excited to get it set up for a while. I finally got a power supply for it, and I overengineered a solution to show me what music is playing. Some time ago I got a USB remote in HackerBox 57 that I've been using to control the music on esgerbeastie while the kvm is set to my work laptop. But if I ever want to see what song is playing, I still had to switch the kvm back to esgerbeastie.

Well, now I have a solution. I installed an MQTT broker on my HA pi (I've been meaning to for a while anyway). I also configured HA to publish a few entities to MQTT, including the basement and outdoor temperatures. Then I wrote a Rhythmbox plugin that posts the current song and status to MQTT (that was a misadventure in itself). And then I wrote an Arduino sketch for the ESP32 that powers the LED screen. It gets the music status, track artist and title, indoor and outdoor temperature from MQTT. It also displays the current time, its WiFi and MQTT status. "W:" is WiFi, "M:" is MQTT, "I:" is basement temperature, "O:" is outdoor temperature, and "X:" and "Y:" are placeholders for other status items I can add once I decide what else to add. A green "u" means "up" and for "down" I show a red "d" instead.

I'm quite pleased with how it looks. Size-wise it is actually a perfect fit between the monitor stand and the bottom of the monitor. I did drop the brightness on the LEDs down to 15% and may still drop it further. I also want to have it monitor the motion detector on my desk and automatically turn on and off. Always plenty more to do.