Sometime last year, I decided to start scanning boarding pass stubs from my air travels. I made them available on my gallery page.

Well, today I finally decided to scan in the stubs from my recent trips to the US, Korea, and London. However, I couldn't find the stubs for Munich to Seoul or for Munich to London. The London one didn't bother me terribly, but I wanted the Munich to Seoul stub. So I thought a bit, and remembered I was reading Millionär by Tommy Jaud on the flight. Sure enough, the stub is in the book.

This gets me to thinking. I often bring a book or two along when flying, and tend to use my boarding pass stub as a bookmark. So I decided to check all the other books I have on my shelf. I found three more stubs: 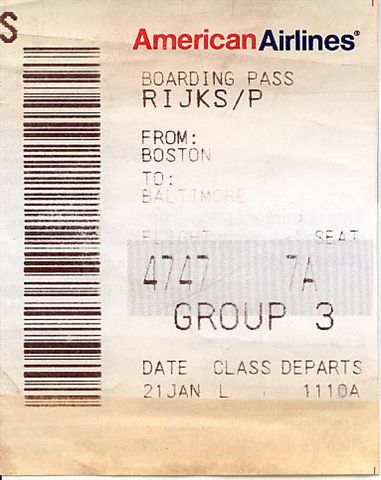 The last one provided a brief mystery, since these stubs don't have a year on them. I knew that a Boston to Baltimore flight was most likely flying home from a Concord event. Which for a January date narrowed the year down to 2004 or 2005. A quick search through the archives finds entries on both January 22, 2004 and January 22, 2005, which is surprising given how little I blogged those years. Both entries describe having just returned from Boston for a Concord event. However, the 2004 entry says I just got back, while the 2005 entry says I got back several days ago.

In case you're wondering if I have too much time on my hands: yes, I do. I took most of last week and this week off. It's a somewhat spontaneous vacation, and I plan to do little other than be lazy or catch up on silly projects like scanning airplane tickets.

My recent vacations have been fun, but travel-intense. I need some time to be lazy in Munich.