Pete's Log: February (and a little bit of March)

OK, blogging slowed down a bit after the super bowl, but since then I had two weeks of lots of fun little events, followed by two and a half weeks of lots of overtime at work. Let's take a look at some quick highlights:

On February 7, I went to Dean's leaving Munich party. So that was sad, but I was glad to get to help send him off.

February 9, was an epic Saturday that involved Spaghetti Eis with Mamie, Starcraft with Branden, Brian, Arun, and Randy, and finally beers at Steve's.

On Sunday the 10th, Mamie, Sky, Bill and I played Diplomacy at Hüttenwirt. It was fun, but the game needs at least 5 people to really work. Carsten stopped by for a beer at some point. We are thinking we should try for another game once it gets to be beergarden weather. A beergarden would be a good spot for people to get up and move around for negotiations.

On the 12th, Sky, Bill, and I met up at Condesa for some burrito and Mexican beer goodness.

On the 13th, I trekked out to Tim's for dinner. It's always great to hang out with him, even if it was a three hour round trip.

On Valentine's Day I watched the new Die Hard movie with Mamie, Sky, Bill, Thomas, Christoph, and Sebastian. I enjoyed the film, it was everything I was hoping for, a.k.a. explosions that make me laugh and Bruce Willis saying "Yippee-ki-yay." Before the movie, all of us but Thomas met up for dinner at an Indian place across from the cinema. I ordered a Vindaloo, and they warned me that it was spicy. I said I wanted it spicy, and they then offered me something "twice as spicy." I went to look for the dish in the menu, but I was told it's not on the menu. So I went for it. And I got something that I would say was of average spiciness for a Vindaloo. Oh well. 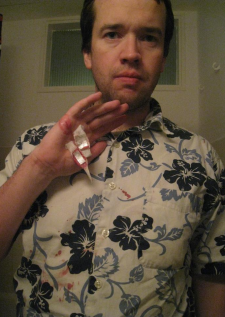 On Friday the 15th we had a bowling event with work. First we watched The Big Lebowski and drank white russians, then we went bowling. Entertaining times were had. I cut my thumb on a bowling ball somehow, so I had to bowl left handed for a while. I actually managed a 90 lefthanded, which I thought was pretty decent. Afterwards, Thomas, Christoph and I headed to the Rockstudio, where I proceeded to cut open my hand, by falling in the mosh pit where there was broken glass on the floor. Thomas bandaged me up, and I was soon back on the dance floor. The day will surely come when I am too old for moshing, but not yet.

On the 16th, Steve and I brewed a ridiculously hoppy amber ale. I cannot wait for it to be ready.

On the 17th, Mamie organized dinner at Ganesha. Sky and Kim joined us.

On February 22 I met up with Bill at the Finest Spirits festival, where I got to try several different whiskeys as well as a rum from Panama. Unfortunately I was pretty exhausted from a long work week, so I didn't stay long.

On the 23rd, I went to Steve and Kim's and drank a number of beers there, with a break for dinner at Hüttenwirt.

This past Saturday I again had Spaghetti Eis with Mamie, then met up with Thomas and Benjamin at Hüttenwirt. When I got home, I played a game of Starcraft with Randy to celebrate 15 years of Starcraft. Our opponents did a dark templar rush that did a bunch of damage to me, but they had no plan for what to do after the rush, so once we had our base covered in detectors, we easily defeated them.

And finally, on Sunday I went skiing in Kühtai with Sky, Bill, Thomas, and Thomas' brother-in-law. We had an absurdly great day of skiing, good snow, perfect weather. I've been in a great mood since then.