As part of my ongoing efforts to organize the basement, I've been going through old files and shredding/recycling as appropriate. While doing so, I found this receipt: 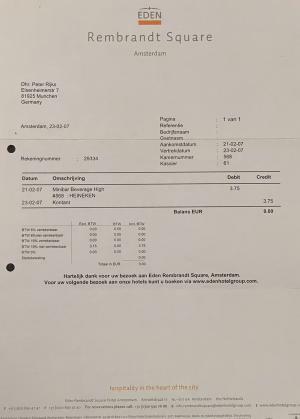 Apparently when I visited Amsterdam in 2007 for work, I had a Heineken from the mini bar in the hotel room. The hotel room would've been paid for by work, so I got a separate receipt for this beer I paid €3.75 for.

And then I filed away this receipt. Was it a joke on myself? An accident? Was there some controversy over this beer that caused me to need to save the receipt? I have no idea. But after keeping it for fourteen years and several moves (including one intercontinental move), it feels wrong to get rid of it now.