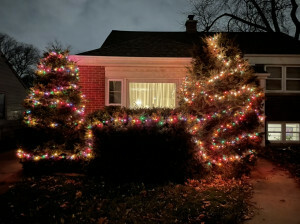 After nine days of being out in the library with the new battery and solar panel, the battery died early Thursday morning. We only had two sunny days during that span and I discovered that circumstances are worse than I assumed: between roughly 10:30 and 11:30 am, the library is in the shade of a tree a few houses down and by 2:30 pm the library is in shade for the rest of daylight hours. And the sun is so far to the South that the panel is probably not delivering a whole lot of power. I think I'm going to have to do some serious work on reducing power consumption.

I do want to record just how much I enjoyed doing the bit of soldering I had to do to get the new charging circuitry integrated. It had been a while since I had soldered anything and I hadn't realized how much I miss it.

I rewrote the search function for Pete's Log yesterday. There were a number of annoyances that I've wanted to deal with for a while. It now uses MariaDB fulltext search across the title, entry and keywords columns. Previously one had to select which of these columns to search, which proved annoying. I also got rid of the and/or boolean mode selector. Instead, the default behavior is to search for entries with any of the terms. A + can be added before a term to make it mandatory. A - can be added to exclude a term. Quotes can be used to search for phrases. Results are sorted by relevance. Overall, I think this is going to make my life easier.

This is also another step away from mysqli_real_escape_string and towards prepared statements everywhere. Which is amusing in a way, since I was just looking at an early version of the search code (timestamped March 3, 2000) and it doesn't use any string escape functions either. But not in a good way.

The last time I filled in the keywords column (which now is no longer even present on the add entry form) was entry 1763 from July 2013. I honestly would've guessed it was much longer ago. The keyword I added for that entry was "Chicago."

I created a dotfiles git repo. I hear it's a cool thing to do. I am starting from scratch. It's been a year and almost four months since I returned to Linux on the desktop and I have been quite happy with that decision, but I also am bored and occasionally annoyed with the defaults Debian gives me. Meanwhile, elsewhere I'm still stuck in a 20+ year old tcsh rut.

It's feeling really easy to go down rabbit holes and on tangents and I see a real risk of dependency paralysis. So I am explicitly forcing myself to stick to relatively standard defaults and to keep it mostly simple.

I've been enjoying that my emacs muscle memory has been coming back, but that has had a downside: I start trying to use emacs keyboard combos in Visual Studio/Visual Studio Code at work, and that's not helpful. I use vim often enough and never have that problem there (probably because vim is sufficiently different), so I'm thinking of putting in the effort of becoming a vim (or maybe neovim) power user.

We'll see how this goes. I certainly don't have the time to play around with this that I had in the 90s.