Jamie and I found ourselves at Half Price Books last week. After browsing a while, I came across their programming section, which actually had a fairly large selection. Unfortunately, it was not a very good selection. It had the typical obsolete content like "Active Server Pages 3.0" along with more niche obsolete content, such as a book on "Programming RPG" which sounded exciting until I learned it was about the RPG Programming Language and not about Role Playing Games.

But something about this graveyard of books made me feel like I should try to rescue one of them. So I browsed until I came across one book that struck me as more "vintage" than "obsolete," namely The Data Compression Book by Mark Nelson (Copyright 1992). 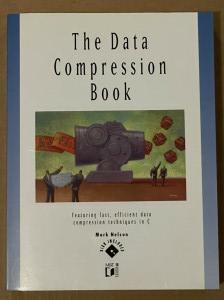 (The disk was sadly no longer with the book)

It hit a particularly nostalgic note by having two chapters on Huffman Coding, a topic I spent some time on back in my Mona days (although my notes on the topic are sadly less detailed than I expected).

Mark Nelson, the author, does have a website (marknelson.us), although it looks like he hasn't posted anything in four years. I did find his Random Compression Challenge interesting, especially since it looks like it grew out of dealing with people on usenet who claimed to be able to arbitrarily compress random data. This is perhaps not as well known as perpetual motion machines, but certainly a rabbit-hole worthy form of kookery. I wonder if engaging with the random-compression-kooks is what led to this unintelligible review of the book.

The cover also has a nice nostalgic vibe to it and I got a kick out of the introductory section covering the differences between K&R C and this newfangled "ANSI C" thing. Totally worth the 8 bucks I paid for it, and maybe I'll even get a chance to use it for reference some day.