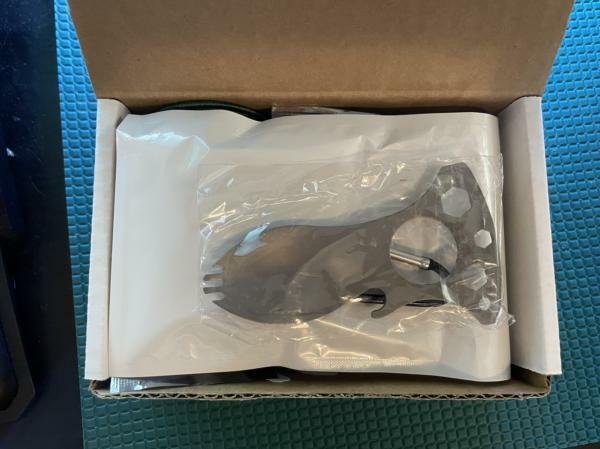 Is that a Spork? It is! A tactical hacking spork! 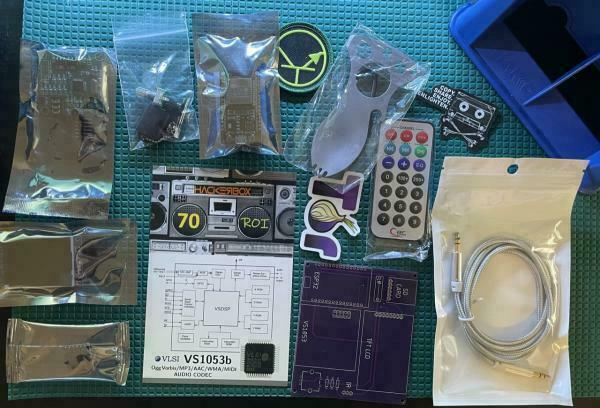 Digging the NPN BJT patch and the cassette tape sticker. Haven't ever used Tor so that sticker will have to go in the unused sticker pile for now. 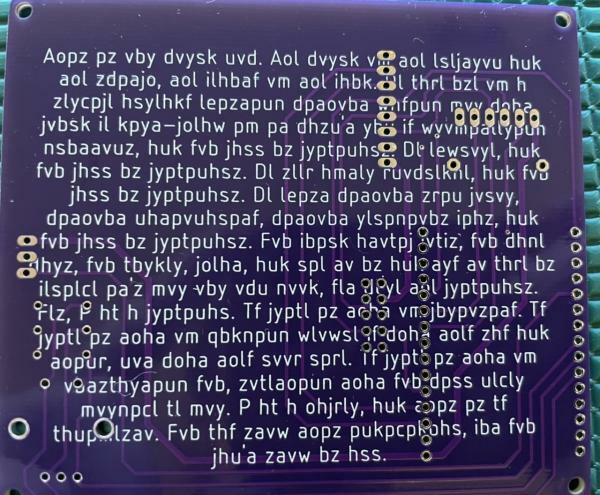 The back side of the PCB has a Caesar cipher. There were a couple hints in the instructions that there would be something like this in the box. Here's the text if you're curious. Dwyg Pda Lhwjap!

So the main theme of this box is to build an internet radio based on ESP32 Radio. The radio is based on an ESP32 with a VS1053 MP3 audio decoder module, a TFT LCD display, a infrared remote and receiver, a rotary encoder/push button switch, and an SD card reader to hold mp3s if you want local music instead of internet music.

It's a pretty cool concept, but this is the first box in a while that I don't want to put together right away. I want to figure out where/how/when I want to use this before I commit to soldering the components to the PCB.

I don't know. It's cool. I don't immediately need it. I have lots of ideas. I think it's going to go in the pile of uncompleted Hackerboxes (which is much smaller than it used to be) for now until I decide how to use it.

Before getting to the assembly of the radio, the instructions include an unrelated suggestion to try Bluetooth Low Energy Capture The Flag (BLECTF) on the ESP32. So I did that. It's basically a firmware you flash onto the ESP32 that guides you through 20 challenges designed to teach you a little about BLE and Linux tools for BLE.

Esgerbeastie's motherboard has bluetooth, so that's what I started with. Before capturing any flags, you need to find the MAC address of your ESP32, and that's where I first got stuck. The BLECTF instructions suggest using either Bluez or Bleah for talking BLE. The Bleah github repo has been wiped and replaced with a deprecation message linking to a different project. Bluez was already installed on Esgerbeastie. So I went with Bluez.

The BLECTF instructions for Bluez say to run

I think that's a typo and it's supposed to be lescan and not blescan. Here's what that got me:

Sigh. Searched and tried various things and finally came across a suggestion to use bluetoothctl instead of hcitool, and I found the MAC address.

The first few challenges were easy enough (once I read the instructions correctly), but then I got stuck on a challenge where I needed to send a write request with a spoofed MAC address. Bluez is supposed to include a utility called bdaddr for modifying your Bluetooth MAC address, but Debian doesn't include it in the Bluez package, so I decided to compile it from source. That was easy enough, but didn't get me much further.

Sigh again. But then I remembered my armada of pis and remoted into one of them, and sure enough it had bdaddr and it worked on the first try. So I got that flag. Out of curiosity I also tried hcitool lescan on the pi and it worked just fine. So it looks like Esgerbeastie's Bluetooth hardware just isn't terribly well supported.

The last challenge was to find the Twitter handle of the BLECTF author, take the md5 hash of it, and then write the first 20 characters of that via BLE to a handle on the ESP32. Should be easy enough.

It took me way longer than I care to admit to realize I was md5 hashing a newline at the end of the Twitter handle. 🤦‍♂️