December of 1998. I was twenty years old and in the tail end of the first semester of my junior year at Notre Dame. If memory serves, I was managing the OIT computer lab in O'Shaughnessy, but in the process of giving up that gig for employment within the CSE department instead. And I started Pete's Log.

May of 2001. I was twenty-two years old and finishing up my first year of grad school at Notre Dame. I was still employed by the CSE department. And I wrote my 1000th post two and a half years after my first.

September of 2021. I am forty-three years old, happily married. We have a delightful daughter, own a house. Never did finish grad school. Lived in Maryland, Munich and Illinois. Worked four different jobs. And I'm writing my 2000th post more than twenty years after the 1000th.

It feels like Pete's Log will always skew heavy towards its ND years. (Like how Brian is still the most-mentioned person, even though it's been 20 years since we lived together.) But I'm working to change that. (At current rates, Jamie is only a few months away from catching up with Brian.) This entry is not only entry 2000. Excluding test entries, this entry also ties 2021 with 2007 for fifth-best logging year, with almost four months to go. It's plausible I could be in the top four years by the end of the year.

Just hoping someday there's at least a 50% chance that a random log entry isn't a Notre Dame one. Not that I dislike the ND years, they were great. It's just that I've also done a lot since then. Here's a silly table:

I do wish I had posted more over the years. One recent motivator has been the On This Day feature, especially when JB entries like 1822 or 1852 come up. Making it easier to add photos was a big help too, I think. Although I have ideas on making that even easier.

Several log droughts have been caused by updates to PHP or MySQL breaking the backend. So note to future self: if the log code breaks, fix it right away! Don't wait for Branden to bug you about it. (Although I am incredibly grateful that Branden did bug me about it)

I do still have an archive of all my Facebook posts from before I deleted my account and have been thinking of integrating them in here somehow. Maybe I should prioritize getting that done so the historical record feels less incomplete. I'm thinking mostly just having them integrate into the On This Day feature, maybe only for logged in users.

Of course, since I updated the stats page to differentiate between real entries and test entries, I know that this is actually only the 1969th real entry. But commemorating entry 2031 doesn't feel quite as exciting.

Another thing I wanted to comment on: In March of 2002, I added a feature to allow entries to be rated. I then apparently went back and gave low ratings to many of my earliest entries. I think because I was disappointed in how short and vague they were. Older me has a very different view of those early entries. I know they're lacking in detail, but I'm proud of young me for starting this project. Not sure if I should go back and change my ratings. Maybe ratings need to be modified to have a time dimension so I can track how I feel about a particular entry over time. But that sounds excessive.

I wonder often if JB will ever read any of this and if so what she'll think of it. I have a diary my Mom started the day before my first birthday and I find it interesting to read, especially now that I'm a parent. 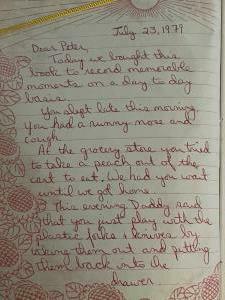 One final note: I didn't commemorate Entry 1000 until Entry 1001. In which I also mention Mountain Dew vs Code Red. So I figured I'd add that nowadays my prefered flavor of Mountain Dew is Baja Blast, but unlike back then, Mountain Dew is now just a very occasional thing in my life.