I spent most of today enhancing the chicken run. Prior to my efforts, their run was just straw on dirt. Here are Anna and Elsa enjoying their perch above the old flooring: 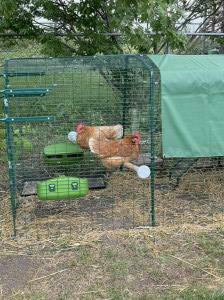 The straw on dirt worked fine. I cleaned it out and replaced the straw weekly, so it didn't get gross, but I had come across this article about wood chip runs and wanted to try it myself.

Since our hens do like to dust bathe, I did want to leave them access to some dirt. So my plan was to keep the area below the coop as dirt for them and to build a frame for the rest of the run to hold wood chips for them.

The biggest part of the job was just moving dirt. I learned recently that digging even a few inches can create lots of dirt to have to deal with. So I was expecting a lot of dirt, but there was still more than anticipated. At least the chickens were eager to help. 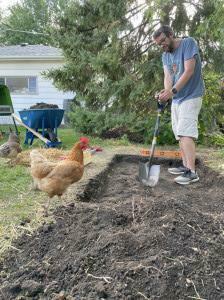 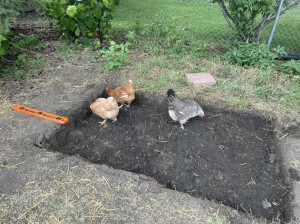 With the frame and wood chips in place, I found myself quite pleased with the result. The chickens seem to like it too. The pictures don't really capture how nice I think it looks now. 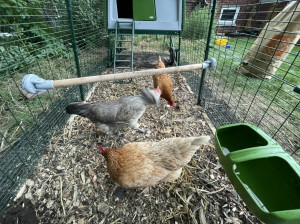 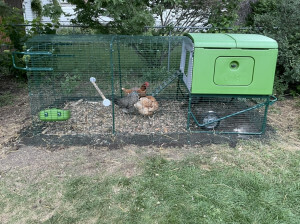 The article I linked above also mentions growing King Stropharia in the wood chips so I ordered a bag of King Stropharia spawn that should be arriving Tuesday. Should be an interesting experiment.